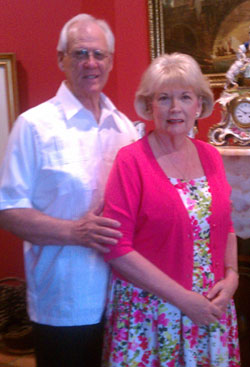 As it was true in the day of the Apostle Paul, so it is true today; we have many instructors, but NOT MANY FATHERS. As a people we are hungry for the kind and gentle leadership of a Christian father. At the same time, we are in need of the spiritual wisdom and power of an apostolic leader. This is true not only for God’s people in general, but especially for His pastors and ministers. Those in church leadership are in particular need of an Apostolic Father. We have been given such a man in John Dean. He is a man of extraordinary gifting, extensive experience, and most especially - a father’s heart.

A Father’s History
John Dean is a native East Texan. He was born in Palestine, Texas and has lived in San Antonio with his wife, Karen, since 1978. John has three daughters, two son-in-laws, a son and two wonderful grandsons.  Though John’s ministry is trans-local, Texas has remained the base of operations during his forty seven years of ministry. However, John’s extended family, his spiritual children, literally span the globe.

The work of an Evangelist
John Dean’s ministry began in 1960 when God called him to preach the Gospel. During those early years, he demonstrated a great gift to preach with compelling authority to draw souls to Christ. He also displayed an extraordinary ability to hear the voice of God with specific revelation knowledge. By God’s grace John’s ministry was extremely successful. Soon, he was recognized as a powerful preacher. People began to notice another gift at work too, prophetic revelation. This exciting combination carried John well beyond Texas. The Evangelist was now ministering throughout Texas, as well as Oklahoma, Iowa, Nebraska and Kansas.

The Work of a Pioneer
In the 1970s, John began a new ministry. It was a mission in Houston for homeless men. John’s vision was to restore them to self-sufficiency by giving job training, addiction rehabilitation, or whatever was necessary. John was quickly recognized as a safe, strong, and wise father. The ministry grew. In fact, as John Dean succeeded in each of the duties that the Heavenly Father gave him, he was given more persons and more ministries to father. In subsequent years, John Dean would start churches in other cities. In each case, John called a man and passed on the work. The key to his apostolic fatherhood has never been ownership, but relationship.

The Work of an Apostle
John Dean’s network of relationships was growing exponentially. In the early 1980s, John was providing oversight for perhaps a dozen different congregations and ministries. But, his reputation as a “Pastor to Pastors” was growing. Church leaders learned that John was both safe and strong. His leadership style was not to steal their power of ministry. Instead, he brought insight, understanding, and security to them. Their ministries were dramatically enhanced by John’s presence. By the end of the 1980s, John Dean was providing apostolic oversight to more than 100 churches! This is an incredible feat. It is almost impossible to understand the strength of character and continuous inspiration from God that is required of a man who is called upon to father this number of church leaders and ministries.

In the 1990s, God continued to add to John’s sphere of influence. Recognized as a significant Father of the Faith, John continued pastoring pastors. However, his tour of duty moved from national to an international level. Throughout the decade of the 90s and into the 21st century, John has ministered across the US, England, Scotland, Wales, France, Germany, Bulgaria, Mexico, Ecuador, Guatemala, South Africa, Zimbabwe, China, Philippines, Romania and Hungary. John has preached deliverance to sinners and healing to the sick. John has ministered to the down and out in the slums of Houston, Texas as well as prophesying to stars in Hollywood. He has laid hands on the poor in third world countries and the governmental lords of England. John has taught in bible schools as well as establishing church government in existing churches. He has also held prophetic conferences on cruse ships.

The Work of an Apostolic Team
Several years ago John Dean was instrumental in the formation of an Apostolic Team which works together to educate, support, and strengthen pastors and ministries worldwide. Alliance International Ministries (AIM) is the next logical step in John’s ministry of fatherhood. AIM works with individual pastors and clusters of pastors, building, equipping, and inspiring them so that they too may come to their full measure of fatherhood in the faith